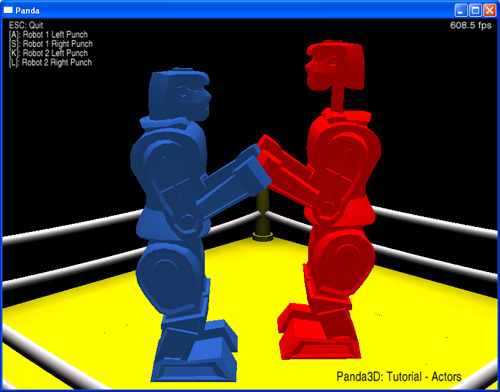 This tutorial will show how to play animations on models aka "actors". We will base this world on a the popular game of "Rock 'em Sock 'em Robots".

Actors are specific models that come with some pre-generated animations. These animations are either available in the same egg file as the model or they are available as their own egg files. Only actors may play these animations, and actors also come with their own set of functions to use. Actors behave almost identically to models but use a different load command called Actor.Actor(). For more information on actors, please consult the Panda3D online manual.

The image above shows the tutorial in action. Use the A,S,K,L keys to make the robots punch and thus triggering their animations.