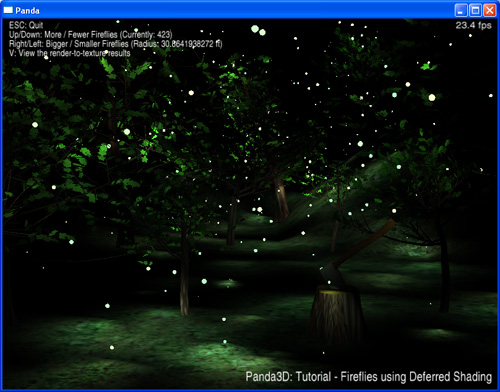 This sample program shows how to do Deferred Shading in Panda. You can have hundreds of lights, and all the lights affect all the models automatically. This is not expensive: the cost is only proportional to the number of actual lit pixels times the number of times each pixel is lit. That's why fireflies make a perfect demonstration --- you could never have 500 lights in a high-polygon scene without deferred shading. But perhaps even more important is the elegance of a rendering algorithm that automatically connects lights to the appropriate objects without the need for LightAttribs.

To understand how deferred shading works, first consider how ordinary shading works in plain OpenGL. In most fairly simple cases, the lighting equation boils down to:

Where the attenuation function depends on the type of light. So anyhow, this equation has four inputs:

So the framebuffer now needs to store surface normal, diffuse color, and depth value (to infer surface position). In practice, most ordinary framebuffers can only store color and depth - they don't have any place to store a third value. So we need to use a special offscreen buffer with an "auxiliary" bitplane. The auxiliary bitplane stores the surface normal.

If there are a lot of lights, things get interesting. You use one postprocessing pass per light. Each pass only needs to scan those framebuffer pixels that are actually in range of the light in question. To traverse only the pixels that are affected by the light, just render the illuminated area's convex bounding volume.

The shader to store the diffuse color and surface normal is trivial. But the final postprocessing shader is a little complicated. What makes it tricky is that it needs to regenerate the original surface position from the screen position and depth value. The math for that deserves some explanation.

The result is that the panda projection matrix boils down to these simple equations:

Look out, there has been a coordinate system change! In the scene graph, Z corresponds to "up", but in clip-space, Z is the depth value (and X,Y address a pixel).

After panda calculates clip-space coordinates, it divides by W. Finally, it rescales the depth-value:

To save our vertex and pixel shaders a little work, we can precompute these constants:

So, here are the equations in their final form: