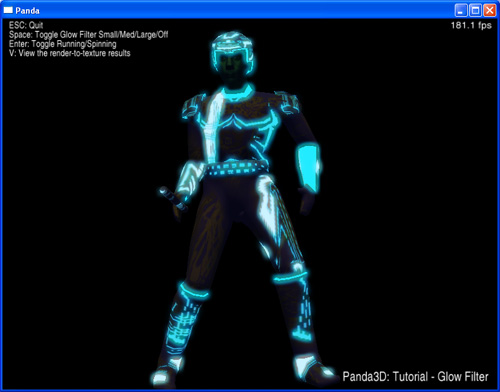 Explanation of the 'Basic' Version

There are two versions of this program: Basic and Advanced. The Basic version relies on Panda3D's automatic shader generation mechanisms and Panda3D's built in catalog of image-postprocessing filters. In other words, in the Basic version, Panda3D is doing all the hard work for us. In the Advanced version, we have written our own shaders and are doing our own image postprocessing.

Explanation of the 'Advanced' Version

The advanced version shows how to use Cg shaders to implement a "glow" postprocessing filter. The demo will only work on video cards that support shaders.

In a final step, the blurred texture is applied to the main window using additive blending - ie, the halos are added to the scene.