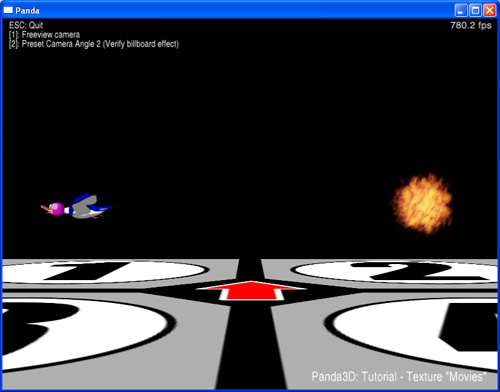 This tutorial will show how to use a sequence of textures on an object to achieve a specific effect. Popular uses of this technique are:

The basic principle of this tutorial is that even though a model file contains a reference to a texture file, the actual texture applied to a model can be changed in panda. Textures are just image files and they can be loaded in panda via loader.loadTexture. Each model loaded into Panda has a texture attribute that can be changed. Not only can this feature be used to change the texture on a model from one to another but it can also be used play an animated sequence on the model by using a sequence of textures and swapping them at regular intervals.

This tutorial will also demonstrate the billboard function which orients an object to always face the the camera. This is useful for 2D sprites in a 3D world.

Above is a screenshot of the tutorial running with two animated sprites. One is a flying duck and the other is an explosion. Only the explosion has the billboard effect applied to it. As the camera moves, the explosion will turn to face the camera while the duck will not.